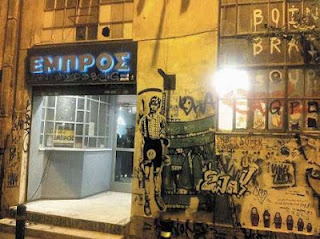 Marx Reloaded will screen at 9pm, Sunday 11 March at Embros Theatre, Riga Palamidou 2, Psirri.
We are very grateful to the theatre committee and to Ilias Marmaras for helping us make this screening possible. We know that Greece is among the places where interest in Marx Reloaded ranks the highest, and after the screening an open discussion will be held with Jason Barker, the film's director, who is making the trip to Athens especially for this event.
Embros Theatre is an occupied space in the Athens downtown area, at the district of Psirri. The occupation was initiated by the collective Kinisi Mavili in November 2011 and soon joined by the movement of Psirri residents and workers as well as other individuals. The occupation hosts projects referring to experimental cultural events, and initiates social-political forms of self-organization actions: http://mavilicollective.wordpress.com/  http://psyrri.blogspot.com/
Posted by Films Noirs at 4:01 AM