filmsnoirs@yahoo.fr
Posted by Films Noirs at 7:54 AM 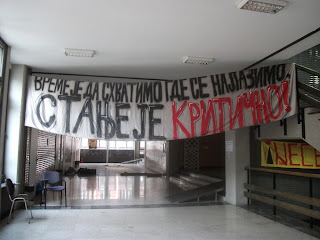 On 23 October, Marx Reloaded was screened at the student occupation of the Philosophy Faculty of Belgrade University. The screening took place as part of an alternative educational programme, organised by the students themselves, in which the film's director Jason Barker and several dozen students took part.
Below is a brief description of the occupation's objectives written by one of the participants:
It is a peaceful student takeover, until our demands are fulfilled. Our demands are based around ideas of free and affordable education for all, and against privatization of public services which education ought to be part of. During the occupation, students are organizing an alternative educational program that consists of lectures, movies, plays, debates, etc. in that way challenging the existing institutional practices.
The occupation began at the School of Philology by a decision of a student assembly called Plenum in which all students were called to take part 10 days ago. Meanwhile, it has spilled over to the School of Philosophy. At the moment we are struggling to spread our occupation to other schools as well.
This is the first time that this kind of opposition to the establishment occurred at our University since 2006. We also see our struggle connected to the similar events in the region, especially with the still ongoing students' protests at School of Philosophy at the University of Zagreb.
Occupation is an event that promotes the values of direct democracy as opposed to not only representative democracy of legal students' bodies, but also the oppressive administrative model of decision making in academia in general, equality as opposed to segregation produced by fees and taxes and credits, solidarity as opposed to application of cost-benefit analysis in our social lives.
News can be found at this Facebook page (only in Serbian unfortunately):