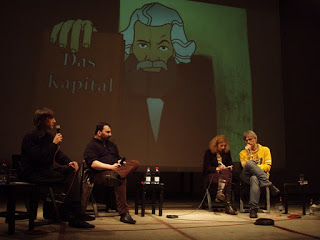 The Serbian-language premiere of Marx Reloaded took place yesterday evening in Belgrade at the world-famous Center for Cultural Decontamination (CZKD). It was also the occasion for the first of a series of debates entitled “Blue or Red Pill?” in which prominent intellectuals, filmmakers and social commentators discuss the film’s themes and their social implications. Details of forthcoming debates in other European cities will be published soon. 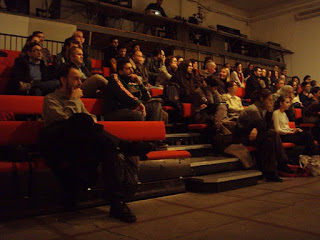 Joining Jason Barker for last night’s debate was the acclaimed Serbian director Želimir Žilnik (pictured at the event, below), whose illustrious career spans more than 40 years and includes numerous prizes such as the Berlin Golden Bear, awarded in 1969 for his film Rani Radovi. 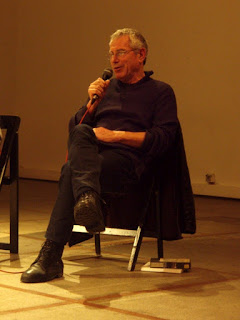 Predictably the screening itself was packed to the rafters. And the debate, moderated by Marxist sociologist Milan Rakita, generated some impassioned interventions, especially from Želimir Žilnik, who unfortunately had to leave before the end to catch his train. “That was one advantage under socialism,” he remarked as he put on his coat. “There were more trains.”
As usual our thanks to everyone involved and especially to CZKD for hosting the event.
Posted by Films Noirs at 8:45 AM No comments: 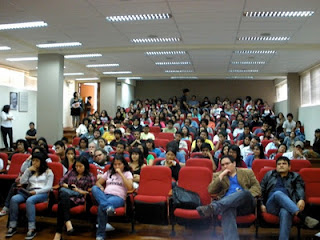 The cinema was "packed to bursting" for the South American premiere of Marx Reloaded at the Pontificia Universidad Católica del Perú in Lima. Congratulations to the organisers who reported "the most popular event in the history of the Social Sciences Faculty". After the projection several academics and commentators made interventions, including the Peruvian sociologist Guillermo Rochabrún.
More information (in Spanish) can be found here:
http://erichluna.wordpress.com/2011/12/13/marx-reloaded-en-lima/
Posted by Films Noirs at 10:33 AM No comments: 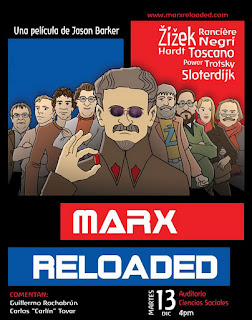 The Spanish-language World Premiere of Marx Reloaded will take place at the Pontificia Universidad Católica del Perú (PUCP) on Tuesday 13 December 2011 at 4pm. The director and co-producer of the film, Jason Barker, will join the event via satellite link.

On behalf of the producers and co-producers of the film we wish the university every success with this event.

More information can be found at the following facebook page:

If you are interested in organising a similiar event at your college or university, or a public screening, then contact us directly.
Posted by Films Noirs at 3:39 AM No comments: